All parties to the WHO FCTC are required by Article 5.3 Guidelines to ensure no conflicts of interest with the tobacco industry for all government officials and employees, and establish rules in protecting public health policies from interference from the industry. Findings from this survey show both current and former public officials working for and in the interest of the tobacco industry. Figure 8 shows the ranking of conflict of interest by country, the lower the score the better the ranking. 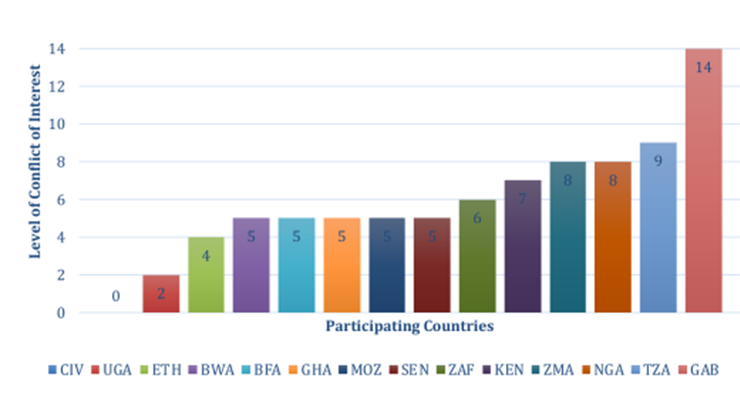 Some government officials, while still holding their official position, also work for the tobacco industry. For instance, in Gabon, the current Chairman of the Board of Directors of CECA-GADIS (representing the interests of the tobacco industry in Gabon) is the Political Advisor to the Head of State. He formally served as Minister and High Representative of the Head of State. Evidence also suggests some current appointees were previously working for the tobacco industry, as seen in Ghana, where the current Minister for Information, the current Managing Director of the New Times Corporation, and the Managing Director of Ghana Post were former employees of BAT Ghana.

In Kenya, both past and present government appointees hold positions in the tobacco

In Tanzania, there is a similar conflict of interest where the current TCC Non Executive Chairman of the Board also holds a government-appointed position as the Chairman for the Confederation of Tanzania Industries (CTI) and Tanzania Start-up Association (TSA). He is also Vice-Chairman of the Tanzania Private Sector Foundation (TPSF). Similarly, the current TCC NonExecutive Director was appointed Financial Officer at Tanzania Standard (Newspapers) Ltd (TSN), and has been serving as a Finance and Administration Manager in the Copyright Society of Tanzania (COSOTA) since October 2020.

As enshrined in Article 5.3 Guidelines, parties shall not accept political donations from the tobacco industry as they constitute a conflict of interest. Where such donations are allowed by law, parties shall require the tobacco industry to declare its political contributions. Despite this, some countries still either do or do not have any guidelines. to make this information public. Among the fourteen (14) countries surveyed, only five; Cote, d’Ivoire, Ethiopian, Kenya, Nigeria and Uganda have some form of guidelines to prevent the funding of political parties by the tobacco industry. In Kenya however, even though there is an existing law requiring public declaration of “any lobbying, philanthropy, political contributions and all other activities by the tobacco industry” this provision has not been implemented. In South Africa, the government does not have a policy to prohibit contributions from the tobacco industry, however political parties will need to disclose the sources and amounts of private funding received and make it public. This was signed into law (Act no. 6 of 2018) by the President and it came into force from 1 April 2021 to regulate public and private funding of political parties. To avoid conflict of interest, the government of Ethiopia has fully withdrawn from the tobacco industry through full privatization of its share in JTI since 2016, conforming to Article 5.3 recommendation to Parties to treat a state-owned tobacco enterprise in the same way as any other tobacco company. In the case of Tanzania Cigarette Company (TCC) who had sold 75% of its share to JTI however, there is no full disclosure on their business, such as their expenditure on marketing, advertising or philanthropic activities, or how they are likely to influence

tobacco control policy. The industry influences public policy through what is referred to as “revolving door”, where former or current government officials take up jobs in the tobacco industryas shown in Table 2.