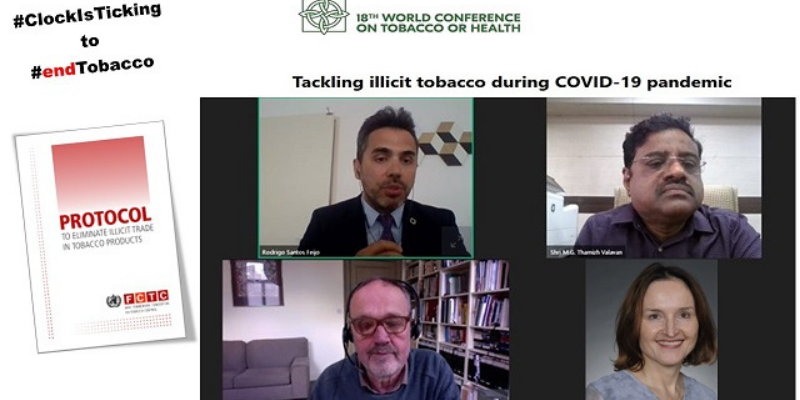 Ending tobacco use globally is not just a compelling public health imperative but is also key for social justice and corporate accountability. Let us not forget that each of the diseases caused by tobacco could have been prevented, and every tobacco-related death averted. Add to this that every health condition that increases the risk of serious outcomes of Covid-19, also has a common major risk factor – tobacco. With over 8 million deaths worldwide caused by tobacco every year, the writing on the wall is clear: if we are to deliver on sustainable development goals, then one of the essential milestones undoubtedly is to #endtobacco.

“Tobacco use being a manmade and industry-propelled epidemic is also entirely preventable, only if we put people and lives before profit. While elimination of illicit tobacco trade is an absolute imperative towards the #endtobacco agenda, we must always remember that tobacco, whether illicit or ‘licit’, kills. All forms of tobacco use kills” said Dr Tara Singh Bam, Asia Pacific Regional Director of the International Union Against Tuberculosis and Lung Disease (The Union).

According to the World Health Organization, the illicit tobacco trade poses a serious threat to public health because it increases access to often cheaper tobacco products, thus fuelling the tobacco epidemic and undermining tobacco control policies. It also causes substantial losses in government revenues and, at the same time, contributes to the funding of international criminal activities.

As the problem of illicit trade is global and beyond borders, it warrants a global well-coordinated effort for its elimination. Over 180 countries worldwide have ratified the legally binding global tobacco treaty (formally called the World Health Organization Framework Convention on Tobacco Control or FCTC) and are enforcing its lifesaving policies. This global tobacco treaty contains the world’s most effective tobacco control and corporate accountability measures and is estimated to save more than 200 million lives by 2050 if fully implemented. Article 15 of this treaty gave the mandate to the governments to come together for the elimination of the illicit tobacco trade. That is why an international treaty (formally called the Protocol to Eliminate Illicit Trade in Tobacco Products) was adopted in 2012 (and entered into force in 2018) and is currently ratified by 62 countries worldwide, including India. Governments are obligated to bring their tracking and tracing systems (to eliminate illicit tobacco trade) into force by September 2023.

Luk Joossens, a board member of Smoke Free Partnership that envisions a world without tobacco, was on the Experts’ Panel of a special virtual session “Tackling illicit tobacco during Covid-19 pandemic” hosted by the 2021 World Conference on Tobacco or Health (WCTOH) and International Union Against Tuberculosis and Lung Disease (The Union). He said that as the global economy has shrunk by 4.4% in 2020 due to the pandemic with a majority of countries in recession, eliminating the global illicit cigarette trade might help to raise the revenue for governments. Revenue losses due to illicit tobacco trade are for an estimated US$ 40.5 billion annually, and if the global illicit trade were to be eliminated, governments would gain at least US$ 31 billion. This could be part of Covid-19 recovery strategy, he said.

Listing some of the challenges in implementing the illicit trade protocol, Luk Joossens cautioned against tobacco industry’s efforts to propose their own traceability system which they control. The global tobacco treaty’s Article 5.3 obligates the governments to stop tobacco industry interference in public health policy as there is a direct, fundamental and irreconcilable conflict of interest between the industry and public health policy. Luk said that many governments in West Africa, which have ratified the global treaty to eliminate illicit tobacco trade, will struggle to implement it because of huge tobacco industry interference. “Big Tobacco is proposing a so-called ‘easy to use’ software to generate unique identifiers” said Luk. Moreover half of the countries that have ratified the global treaty to eliminate illicit tobacco trade are low and middle-income countries with lack of expertise and funding to establish a tracking and tracing system, he added.

Dr Hana Ross of Research Unit on the Economics of Excisable Products, University of Cape Town, South Africa, was also on the experts’ panel. She said that although South Africa has not yet ratified the global treaty to eliminate illicit tobacco trade, it is making commendable progress towards addressing the issue. During the pandemic, South Africa had imposed a much longer sales ban – of almost 5 months – on tobacco products (from 27 March to 17 August 2020) compared to other countries like India where ban on sale of tobacco was imposed for only 6 weeks, or Botswana where the sale ban was there for 12 weeks. However, the benefit of sale ban gets punctured due to illicit tobacco trade in South Africa, where one-third of the tobacco market is estimated to be of illicit tobacco products.

Did the sale ban work? Dr Ross informed that 9% of the smokers reportedly quit during the sale ban in South Africa, out of which two-thirds planned to stay quit for good. However, 93% of the smokers could purchase cigarettes in South Africa despite the sales ban. Also, the average price of cigarettes went up by 250% relative to the price before the lockdown in the country.

Dr Ross said that only a tiny fraction of people who could get a cigarette during the sales ban got it from formal retailers. Most of the users got it from Spaza shops (informal convenience stores), house shops, street vendors, friends and family, via WhatsApp groups, etc.

Moreover, during the sales ban, tobacco manufacturers could produce cigarettes for export. But guess what? Exports increased dramatically but most of them might have not left the country or came back from abroad to be sold in the country itself, said Dr Ross.

She called on South Africa to ratify the global treaty for eliminating the illicit tobacco trade and substantially increase tobacco taxes to boost public health and to make up for the revenue loss.

Dr MG Thamizh Valavan from Ministry of Finance, Government of India shared that after the country ratified the global treaty for eliminating illicit tobacco trade in 2018, there has been some progress to address the issue. He said that according to the World Health Organization, illicit cigarette market in India accounted for 6% of the total cigarette consumption in 2016-2017, though industry claims are much inflated. Retail value of illicit cigarettes is over US$ 753 million including foregone tax revenues of around US$ 390 million. He said that India is considering adopting the Kenya model of combating illicit tobacco trade, in which all costs to implement the obligations of the treaty to end illicit tobacco trade are collected from the industry. This ensures that all steps taken by the government towards eliminating illicit trade will remain cost-neutral for it.

Rodrigo Santos Feijo from the global tobacco treaty (WHO FCTC) secretariat made an important remark that eliminating the illicit tobacco trade will not only benefit public health and incur more revenues for the government but also help us accelerate progress towards other sustainable development goals. The next important meeting of the global treaty for elimination of the illicit tobacco trade is due in November 2021 now.

“Right now our greatest chance of dying from Covid-19 is not necessarily related to the treatment we receive or the variant, but our outcome of Covid-19 is pre-determined by our health history – whether we have hypertension, diabetes (or other conditions associated with Covid-19 serious outcomes) – whether you have had years of badly managed underlying health conditions- this is the single most predictive and prognostic marker of whether you will die from Covid-19” had said Dr Michael Ryan, Executive Director of the World Health Organization Health Emergencies Programme, who also leads the team responsible for international containment and treatment of Covid-19. Dr Ryan was speaking in end of March 2021 at a report launch by CSO Partnership for Development Effectiveness.

That is why we at CNS (Citizen News Service) and Asha Parivar, strongly believe that as tobacco is a major risk factor for conditions that determine whether every Covid-19 positive person will develop serious outcomes or die, tobacco industry must be held legally and financially liable for putting humanity in such a vulnerable position in terms of preventable health conditions that are often lethal. While eliminating illicit tobacco trade is purported to increase revenues and reduce the number of smokers leading to health benefits, let us not forget that the ultimate goal is to prevent diseases arising out of tobacco use and to save lives from killer tobacco.