Article 5.3 Guidelines provide a range of preventive actions governments can take to protect their tobacco control policies from being undermined by commercial and vested interests of the industry entities working on its behalf. Governments require information periodically on activities and practices of the industry to ensure transparency and accountability of its actions. 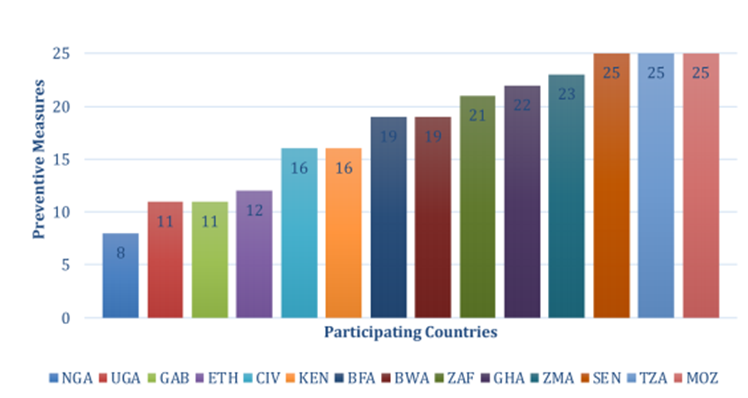 Countries such as Gabon, Nigeria, Ethiopia, and Uganda have made progress in drawing up measures to guide officials in their interactions with the tobacco industry

from offering donations to any public entity and forbids government agencies/entities from accepting or soliciting contributions of any kind from the industry. Section 28 of the Act provides for the prevention and management of conflict of interest in dealings between public officials and the

In Gabon, the 2016 Decree 0286/PR/ MSPSSN prohibits interactions between public authorities and the tobacco industry. The decree also partially covers the issue of periodic submission of information on production, manufacturing, market share, marketing expenditures, revenues and other activities, including lobbying, philanthropy, and political contributions.

In Ethiopia, a National Tobacco Control Coordination Committee and Tobacco Industry Monitoring and Response team exist. Coordination committee seeks to realize multisectoral responses, under the aegis of the Ethiopian Food and Drug.

Administration (EFDA). The committee also sets a code of conduct prescribing standards for any public officer, including service providers, contractors, and consultants involved in setting or implementing public health policies for tobacco control. The EFDA collaboratively works with civil society organizations, the World Health Organization, and other partners to enhance its effort on awareness-raising.

In Uganda, the Tobacco Control Act provides for procedures for disclosing the records of interactions (agenda, attendees, minutes and outcome) between the government and the tobacco industry and its representatives. There is also a draft tobacco control communication plan to raise awareness on tobacco control issues as they exist or as may arise including awareness on Article 5.3 of the WHO FCTC and Part VIII of the Tobacco Control Act.

Countries such as Mozambique, Senegal, Tanzania and Zambia have neglected firewalling their tobacco control efforts and have been particularly vulnerable to high levels of industry interference Currently, the government of Senegal has no program, system or plan to systematically sensitize its political departments to the Guidelines of Article 5.3 of the FCTC. There is also no policy in place to prohibit the acceptance of any form of contribution/gift from the tobacco industry. Similarly, in Zambia, there is no evidence that the government has put in place any procedure for disclosing the records of its interaction with the tobacco industry and its representatives.

The government of Tanzania, similar to Senegal and Zambia, does not have a program or plan to consistently raise awareness within its departments on policies relating to FCTC Article 5.3 Guidelines. There is also no code of conduct for public officials, prescribing the standards with which they should comply in their dealings with the tobacco industry. The tobacco industry is not required to periodically submit information on tobacco production, manufacture, market share, marketing expenditures, revenues and other activities such as philanthropy. The government has not put in place a policy to disallow the acceptance of all forms of contributions/gifts from the tobacco industry.

In Mozambique, despite the presence of a code of conduct, there is nothing specific for implementation of Article 5.3. The government does not also have a procedure for disclosing the records of its interactions (such as agenda, attendees, minutes and outcome) with the tobacco industry and its representatives. The tobacco industry is not required to submit information on tobacco production, manufacture, market share, marketing expenditures, revenues or any other activity, including lobbying, philanthropy and political contributions.

Some countries could do better to stop tobacco industry interference

In South Africa, though the draft code of conduct on Article 5.3 Guidelines for public officials has been discussed, there is no progress. Also, despite the SARS requiring the tobacco industry to submit information on production, manufacture, market share, expenditures, and revenue, the National Department of Health does not require information on lobbying, philanthropy, or political contributions. Similarly, in Ghana, the code of conduct for public officials, prescribing the procedure government dealings with the tobacco industry is yet to be formulated despite a provision in the Tobacco Control Regulations (L.I 2247) that authorises the Minister of Health to develop such a code of conduct.

In Cote d’ Ivoire, the 2019 Law No. 2019-676 in its Article 5 requires tobacco companies to communicate annually to the Ministry of Health any information relating to the quality, quantity, composition and emissions of tobacco products83. However, the tobacco companies do not comply with this requirement.