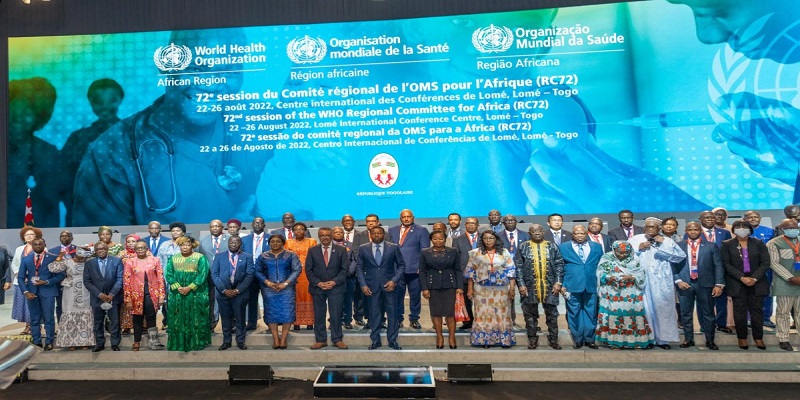 The 72nd session of the WHO Regional Committee for Africa is taking place in Lomé, Togo. The session was launched by Togolese President Faure Essozimna Gnassingbé, in the presence of several dignitaries, including the Director-General of the World Health Organization, Dr. Tedros Adhanom Ghebreyesus.

About 700 delegates are attending the meeting and will reflect amongst others, on the COVID-19 pandemic and its impact on the health system, non-communicable diseases, climate change, epidemics, health financing, health emergencies and partnerships in the health sector.

Amongst the items to be discussed during the session is the WHO progress report on the global strategy to accelerate tobacco control: Advancing sustainable development through the implementation of the WHO FCTC 2019–2025. The strategy was adopted in 2018 by the Conference of the Parties (COP8) to the WHO FCTC and is intended to guide accelerated attainment of the overall target of a 30% relative reduction in tobacco use by 2025.

The report highlights that sixteen (34%) Member States have developed and implemented multisectoral tobacco control strategic plans aligned with the WHO FCTC while twenty-two (47%) Member States have improved tax and price measures through policy reform, using the WHO Tax Simulation Model (WHO TaxSim) tool for data analysis and modelling to provide the scientific basis for reforms.

It also highlights the Economic Community of Central African States (ECCAS), the Economic Community of West African States (ECOWAS) and the West African Economic and Monetary Union (WAEMU) which have adopted tobacco tax directives, as well as increasing civil society engagement in tobacco control at the global stage, notably the African Tobacco Control Alliance (ATCA), which was admitted as an observer to the Conference of Parties of the FCTC at its Ninth session.

The report notes that tobacco industry interference has remained a significant challenge for tobacco control in the Region and some Member States have reported cases of interference, including litigation against tobacco control laws and regulations in Burkina Faso, Kenya, South Africa and Uganda.