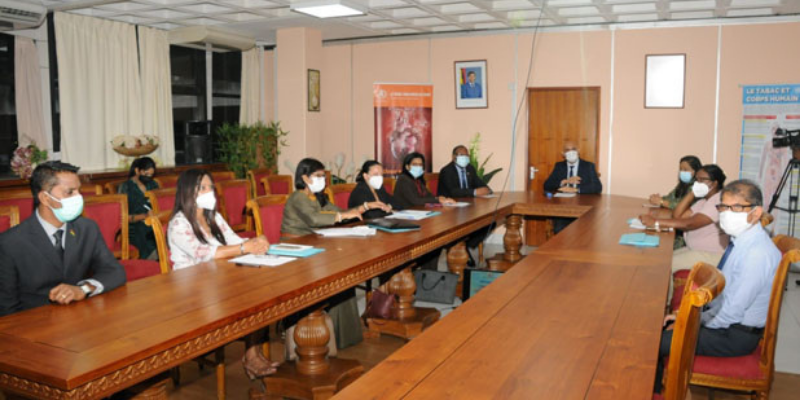 GIS – 24 May 2021: Our mission is to promote quality healthcare and ensure the wellness of all our citizens, particularly our youngsters, who are the main targets of the tobacco industry, said the Minister of Health and Wellness, Dr Kailesh Kumar Singh Jagutpal, this morning, at the seat of his Ministry in Port Louis.  He was speaking during the launching of a three-day validation workshop on the amendments to the Public Health (Restrictions on Tobacco Products) Regulations 2008.

Dr Jagutpal highlighted that the new Tobacco legislations will align with Government’s commitment as a proud party to the World Health Organization’s (WHO) Framework Convention on Tobacco Control and the Protocol to the Elimination of Illicit Trade in Tobacco Products. This, he added, will undoubtedly consolidate our status as one of the regional leaders in tobacco control in Africa and will help in drastically reducing the prevalence of tobacco use in the country.

The new set of regulations, recalled the Minister, which will be presented to the key stakeholders have been elaborated by the Technical Committee of the Ministry of Health and Wellness, set up to work on the amendments to the 2008 Regulations. The Committee has also been assisted by the technical legal experts of the WHO, he added.

Acknowledging that the tobacco industry worldwide is a powerful industry with an estimated market size of 932.11 billion dollars in 2020, Dr Jagutpal underlined that the industry is constantly adapting its products so as to attract more users, mainly the youth, to inflate their profit margins. He deplored that novel and emerging nicotine and tobacco products such as flavoured cigarettes, heated tobacco products, and e-cigarettes are changing the tobacco product landscape. Hence, it is imperative to act in a timely and efficient manner and prevention today must take the form of policy measures, such as stringent laws and enhanced taxation, he said.

He pointed out that the ambition of Government is to make Mauritius the first country in the world to impose health warnings with the largest surface coverage area on packages of tobacco products. He also stated that excellent strategies put in place over the years such as restrictions on advertising, promotion and sponsorship, and mandatory health warnings on packages, have produced excellent result.

Also present at the event, the WHO Representative in Mauritius, Dr L. Musango, underscored that the development of the new set of Tobacco Regulations represents a new milestone on stronger tobacco control policies in Mauritius. He lauded the Government for having taken bold measures over the years as regards tobacco control such as banning of tobacco advertisement, promotion and sponsorship; banning of illicit trade of tobacco products; implementation of pictorial health warnings on cigarette packets; and implementation of the Public Health (Restrictions on Tobacco Products) Regulations 2008.

Dr Musango reported that according to the WHO, the tobacco epidemic is one of the biggest public health threats the world has ever faced, killing more than eight million people a year around the world. More than seven million of those deaths are the result of direct tobacco use while around 1.2 million are the result of non-smokers being exposed to second-hand smoke, he added. The prevalence of smoking remains high among the youth in Mauritius, hence the need to implement stronger Tobacco legislations to reduce tobacco consumption in the country, he stated. He expressed confidence that the new set of legislations will be a powerful weapon in the fight against the tobacco epidemic.

While an overstatement of the illicit trade of tobacco products may... read more