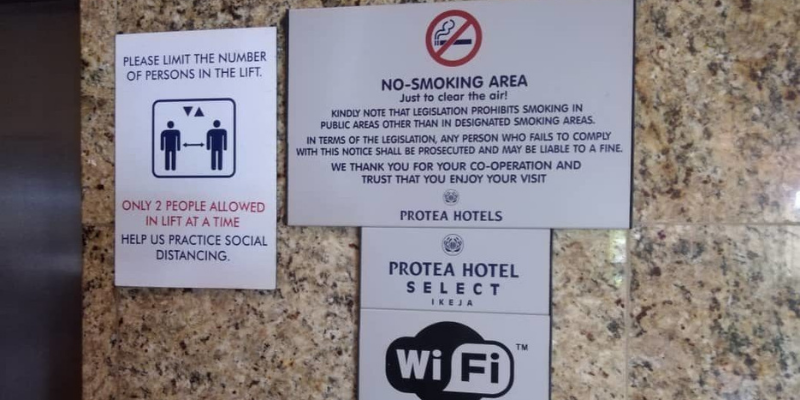 A research found that the Nigerian health system spends over N500 billion yearly to treat illnesses caused by smoking and passive smoking.

Sam (surname withheld), a second-year National Diploma student at the Yaba College of Technology in Lagos, says he stopped reading in the school due to exposure to indiscriminate smoking.

The 21-year-old has never seen a ‘No-smoking’ or ‘Smoking area’ sign on the campus. He says there is no designated place for smoking in the school.

“My friends and I used to do our assignment when we first gained admission here but we noticed that some students smoke beside the Art Complex and also behind the School of Liberal Studies at night, they smoke weed. Sometimes, I also perceive it in class, since then we take our assignments home,” he said.

Contrary to the stipulations of the Lagos State anti-smoking law, most public places, including tertiary institutions and hotels, do not have designated smoking places.

The Lagos State House of Assembly passed the ‘Law to Provide for the Regulation of Smoking in Public Places in Lagos State and for Connected Purposes’ bill in January 2014 and it was signed into law by the then governor, Babatunde Fashola, a few weeks later.

The seven-page law, which comprises 16 sections, outlaws smoking in all public places such as libraries, museums, public toilets, schools, hospitals, daycare centres, schools and public buses, restaurants, hotels, stadia, among others. Penalties for defaulters range from N10,000 to N50,000 fines or imprisonment.

According to Section 3(ii) of the law, “Without prejudice to the above subsection, an owner, occupier or a person in charge of a place listed in Schedule II may designate a section which shall not be more than ten per cent (10%) of the premises as a ‘Smoking Area.’” The facilities listed in Schedule II of the law include tertiary institutions, bars and nightclubs, and hotels.

A report by the Centre for the Study of Economies of Africa (CSEA), titled Health burden and economic cost of smoking in Nigeria, revealed that Nigeria records 28,876 preventable deaths related to tobacco annually and the country “has been leading tobacco markets in Africa and the absolute number of active smokers remains one of the highest on the continent.”

A PREMIUM TIMES’ check of public places in Lagos showed that most of them do not have designated smoking places within their facilities.

Academic institutions like the Yaba College of Technology, Lagos State University (Badagry entrance), St Mary and Alfred, and some other public secondary schools do not have the “No Smoking” symbol at their entrances as provided by the law.

A staff of St Mary and Alfred, who refused to identify herself, said “I’m not aware. It is somehow, don’t you think”?

She urged the government to inform schools in Lagos of the law and their role in the implementation process.

Section 4 of the law stipulates as follows:

“(1) It shall be the duty of any person who owns, occupies or is in charge of Duty of the management of a ‘No Smoking Area’ to Owner/Occupier

Most hotels, schools, banks, restaurants, shopping malls, and religious centres visited in Ikeja and Surulere did not fully comply with the law. For instance, Ikeja City Mall in Ikeja and Shoprite and Leisure Mall in Surulere do not have the signage displayed at their gates or within their facilities.

Some of the workers in the malls who spoke to this reporter said they had never seen any of the signage on their premises. But security guards at the cinemas at the malls in Surulere and Ikeja said they do not have the signs but that it is displayed on their screens for viewers before the start of movies.

Chinenye Peter, the manager of Palasino Hotel in Surulere, said although there is no signage that their lounge is the only place permitted for smokers, the receptionist informs every guest at the point of entry of the hotel regulations.

While some hotels do not have ‘no smoking’ signs at their gates, they, however, display it at their reception and outside the elevators.

Michael Odogwu, a hotel manager in Surulere, said they “check out” from their room any guest found violating the anti-smoking law.

“We once caught two guys smoking in their rooms, so when they were discovered we checked them out. Because they violated the rule and they had been told not to in the first place.”

Ms Peter said they also expel defaulting guests from their facility, but after they had issued the first warning.

“Once we detect, we issue a warning, and if it continues we take action. The person is not entitled to a refund. If it becomes violent we have the DSS and the police number to take care of it,” she said.

She added that “in the lounge, we only allow some types of smoking. Marijuana, narcotics, are not allowed, the bouncer will bounce such people out.”

Tosin Agunbiade, an environmentalist, said tobacco products have a damaging impact on the environment aside from the health consequences.

He said cigarette butts are not just a nuisance but toxic waste and when not properly disposed of can cause fire outbreaks.

“They contain chemicals that contaminate our waterways and ground soil and harm our wildlife. Cigarette butts cause pollution by being carried as runoff, to drains and from there to rivers, beaches, and oceans,” he added.

Mr Agunbiade urged the state government to install CCTV in “strategic places” to strengthen the enforcement of the law and to safeguard lives and properties.

“If possible, designated smoking areas should be provided and the waste generated while smoking and after should be properly managed.

“General public announcement or awareness should be done periodically. People need to be educated and informed about the effect smoking has on the environment, health safety, and the possible sanctions.”

Since August 2014 when the anti-smoking law came into effect in Lagos, there has been no reported case of arrest or prosecution by the authorities.

The Lagos State government has not demonstrated any willingness to implement the law, said Akinbode Oluwafemi, a tobacco-control advocate.

“We are yet to see what they are doing,” said Mr Oluwafemi, whose organisation, the Environmental Rights Action/Friends of the Earth Nigeria, was instrumental in the passing of the law.

When this reporter visited the information unit of the Lagos State Environment Protection Agency (LASEPA) to enquire about the compliance to the law and prosecution rate, she was given a phone number by a staff identified as Ms Tolu to send questions via text message. She said her boss was unavailable.

Messages and phone calls to the number were not responded to.