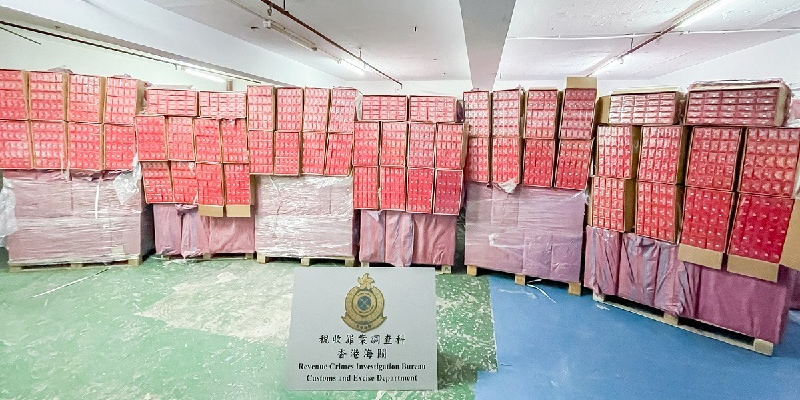 The cigarettes are estimated to be worth HK$76 million (US$9.7 million) on the open market.

In Hong Kong, the trade or possession of illicit cigarettes carries a maximum penalty of HK$1 million ($128,000) and a two-year prison sentence.

Photos supplied by Hong Kong Customs appear to show boxes of Marlboros and other major-brand cigarettes, but it is unclear who supplied them and whether they are genuine or counterfeit.

Investigations by OCCRP have highlighted the role of transnational tobacco companies in smuggling their own product across the globe.

Big Tobacco companies such as Philip Morris International, British American Tobacco, and China’s state tobacco monopoly smuggle or work with smugglers in order to penetrate and retain their markets, avoid taxes, and establish brand loyalty among their users.

Experts such as Benoît Gomis from the University of Toronto have documented how tobacco companies can offer their product at a cheaper price if they divert it onto the black market, avoiding high excise taxes. This leads to more sales and ultimately greater profit, Gomis says.

This is reflected in the recent seizure made by Hong Kong authorities; the 27 million cigarettes had a duty value of roughly HK$52 million ($6.6 million), or 68 percent of its total value.

Gomis further argues that the illicit circulation of smuggled cigarettes gets more young people smoking who otherwise wouldn’t be able to purchase them legally, while simultaneously establishing a sense of brand loyalty amongst them, thereby giving that particular tobacco company a leg-up in the market.

Transnational tobacco companies encourage or allow illicit sales in a variety of ways, including working with distributors who smuggle their product, allowing cigarettes to be diverted to illicit markets while in transit to their reported destination, or oversupplying low-tax or fragile jurisdictions, such as war zones.

The once clean cigarettes are subsequently sold illegally without their proper duties paid.

These activities have been well-documented in European and U.S. multinational tobacco companies, as well as China’s state-owned tobacco manufacturer, the China National Tobacco Corporation (China Tobacco), which controls roughly 45 percent of the global market and has approximately 300 million loyal smokers at home.

Investigations by OCCRP have documented how China Tobacco has forged into new markets in Europe and Latin America where their brands aren’t legally sold.

“Smuggling is a way to expand the market,” explained Daniel Rico, Head of the Colombia-based research firm C-Analisis.

For example, while Chile is the only South American country that has legalized the sale of Chinese-made cigarettes, OCCRP investigations discovered that seizures of Chinese cigarettes in Brazil increased by almost 165 percent last year, according to data obtained through a Freedom of Information request.

And in Mexico, it is reported that of the 7.2 billion illicit cigarettes smoked in 2019 and 2020, roughly 38 percent were from China, according to Oxford Economics, a global forecasting and analysis organization.

One suspected reason why these trade violations are not properly enforced in China is the revenue that China Tobacco brings in.

As the country’s fourth most profitable company, China Tobacco supplies as much as 11 percent of the state’s tax revenue.

The illicit sale of black market cigarettes then comes at the expense of other governments and revenue authorities.

In Venezuela, the 300 percent rise in illicit cigarettes consumed since 2019 has reportedly cost the government $130 million in lost annual tax revenue.

Loose regulations and lax enforcement mean that companies can subvert cigarette import and export laws throughout the continent with few repercussions, according to Maria Lorena Cummings of the Colón Chamber of Commerce in Panama.

“It’s such a profitable business that you can take the risk,” she said.