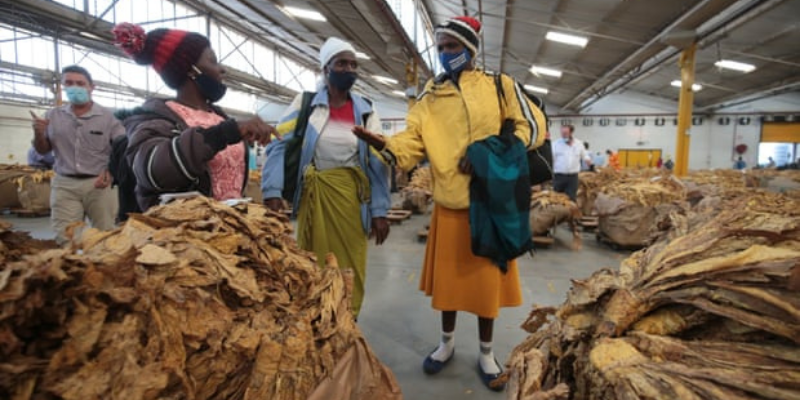 At the mercy of international markets and denied access to mainstream finance, the enterprising growers face a precarious existence

Moreen Tanhara waits patiently for officials to inspect her tobacco. The 49-year-old has travelled nearly 100 miles (150km) overnight in an old lorry to reach Tobacco Sales Floor, an auction house in Harare. Tanhara sits quietly on one of the fragrant sacks she has brought from Guruve, a farming area north of Zimbabwe’s capital, while on the auction floor workers prepare tobacco leaves for the first sales of the season.

The auction house attracts farmers from across the country but this year, due to Covid-19 restrictions, only a few are allowed on the auction floor. Dozens more wait outside, among them Chinese tobacco dealers, the country’s main buyers.

Every year Tanhara, a widowed mother of four, comes here to sell her crop. If prices are low, she leaves disappointed but this year she is hopeful after a good rainy season. Her tobacco is given a high grade and opening prices are strong – $4.30 (£3.10) a kilo.

If she turns a healthy profit, it will be thanks in part to a stokvel she and other women set up in 2020, to help them raise money and improve their farming techniques.

Known as mukando in the Shona language, a stokvel is a savings scheme like a credit union where individuals pool their resources and take it in turns to use the money raised. They are widespread in South Africa, but are becoming popular among female tobacco farmers in Zimbabwe.

Tobacco is a capital-intensive cash crop. If prices are good, it can be very profitable. Zimbabwe is the largest producer in Africa and in 2018 tobacco accounted for about 10% of the country’s GDP. The government wants to make it a $5bn industry by 2025.

But growing tobacco has traditionally been the preserve of commercial farmers, predominantly men. While more female smallholders are taking it up, they find it difficult to access loans from mainstream banks and are often forced to borrow from loan sharks.

“I joined a [stokvel] club of 10,” says Tanhara. “We give $20 a month so essentially, each month one member has $200 to buy inputs so that they are ready for the time we plant for the season. This is very helpful for many women in my community, who can now afford to grow the crop and send children to school.”

But for Sherita Kanguru, 43, from Mvurwi, about 60 miles from Harare, even a stokvel cannot cover all costs, particularly labour, a big expense.

Women in Kanguru’s village pay $5 a week as part of the club’s saving scheme.

“We do a stokvel and sell bread as a club, but it is not enough to cater for all the costs of growing the crop. We encourage ladies to start saving the money from the sales so that they do not get stranded when the season starts,” says Kanguru.

“We need help just like the contract farmers because we also contribute to the exports, especially in unprecedented times like Covid-19. We need support the most.”

Contract farmers usually receive credit, as well as a guaranteed market, from the companies that buy their crop.

Some growers at the auction are sceptical of the schemes, however. Deborah Mukoyi, 39, says: “We have stokvels in Karoi, where I live, but it is tough to coordinate since some women do not have any money to join in. We hope banks will trust us with funds in the next season because we have the capacity to repay.”

Retmeria Mubvumbi, 49, of Mount Darwin, says stokvels are not sustainable.

“The money is not enough and sometimes you may end up using it for other household obligations. What we require is a fund for independent producers so that we also grow,” she says.

The government has created the Land Agricultural Development Bank, intended to offer financial support to farmers. But they are still at the mercy of the market.

“We had good rains and the leaves were very good, but the prices were very low,” says Kudzai Butai, 65, from Karoi. She was hoping to get $2.85 or $3 a kilo, but her crop was graded as low quality so prices started at $1.65. “The painful thing is that we would have paid a lot of money for labour and transport to come to the [auction] floors. All the money will go to the transporter.”

The growers’ problems are not helped by the government’s insistence that only 60% of the sales are paid in US dollars. The remainder must be paid in local currency, at the prevailing exchange rate. The tobacco-selling season is one of the few times the government receives any foreign currency. But farmers complain they lose out because their input and labour costs are paid for in US dollars.

Patrick Devenish, chairman of the Tobacco Industry and Marketing Board, said: “The board is aware that growers have viability challenges due to high costs of production and acknowledge that a lot still needs to be done to reduce the costs of production.”

After a long day at the auction, Tanhara heads back to Guruve, where her crop is still being harvested. It will only be after the long selling season ends in August that she will know if this year has been a success.

“I am looking forward to harvesting 200kg of tobacco. I just came with a few bales to test the market, I shall be coming back to sell more. From what I am hearing, the prices will be good this year, so I am hopeful that I will make a profit,” she says.