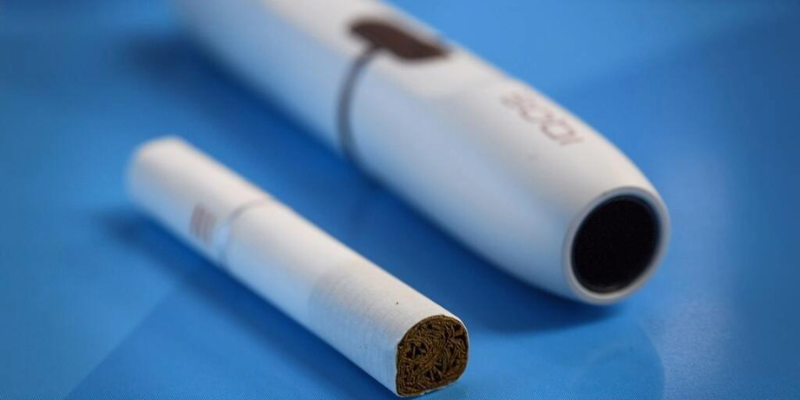 Philip Morris International, the world’s biggest multinational tobacco company, is drastically misleading consumers about the amount of nicotine in its range of Iqos heated tobacco products, developed by the company as a “better” alternative to cigarettes. In some promotional material, and to Bureau staff posing as consumers, Philip Morris International (PMI) has claimed there is 0.5mg of nicotine in each tobacco stick, but new research conducted by the Bureau has revealed the actual figure is more than eight times higher.

There are currently no international standards for testing the content of heated tobacco products, leaving a grey area for how this information is ascertained and presented to consumers.

Heated tobacco products are rapidly growing in popularity and now account for more than 2.5% of sales of all tobacco products across the EU. These devices heat disposable sticks without burning them and are distinct from vapes or e-cigarettes, which usually contain nicotine but not tobacco. PMI estimated last year that its heated tobacco range has about 20 million users.

The Bureau’s tests – which were carried out by Unisanté, a university centre for general medicine and public health in Switzerland and analysed by Force Technology in Denmark – reveal that there is 4.1mg of nicotine in each disposable tobacco stick. Nicotine is one of the most addictive drugs in the world alongside heroin and cocaine, and is what gets people hooked on tobacco, which kills more than 8 million people every year.

PMI’s 0.5mg figure appears to be derived from its own modified version of the International Organization for Standardization (ISO) testing regime. The ISO regime measures the nicotine in a cigarette’s emissions – what you breathe in – which tends to be substantially lower than the total nicotine a cigarette contains.

Yet even if the 0.5mg figure was meant to refer to the stick’s emissions, the Bureau’s testing found that each stick releases more than double this: 1.2mg. When approached by the Bureau, PMI said that it had found a similar figure from its own “intense smoking” test regime – but we could not find any evidence that it has ever used this figure in any public communications.

PMI accused the Bureau of conflating nicotine emissions and nicotine content. It added that its own testing had found up to 4.6mg of total nicotine per stick and that the sticks “are considered to be as addictive as cigarettes”.

It also said the nicotine content of both heated tobacco sticks and cigarettes “is of low relevance to consumers”, pointing out the differences between nicotine content, emissions and exposure (the amount absorbed by the user).

But without any clear universal regulation as to which figure should be used and how it should be described, consumers will continue to be misled.

The testing and quantifying of a product’s nicotine content has long been a key area where Big Tobacco companies seek to use regulatory loopholes to their advantage.

The ISO testing method, favoured by the EU and used by PMI, has been heavily criticised by scientists for underestimating actual smoking behaviour; researchers say it is “inadequate for the purposes of product regulation or consumer information”. The Bureau’s test used the Health Canada Intense regime, an alternative testing method that has been validated and recommended by the World Health Organization (WHO).

Almost two decades ago, the WHO warned that using the ISO method to calculate a numerical value for nicotine content in cigarettes was misleading. Its Framework Convention on Tobacco Control states: “Tar, nicotine and other smoke emission yields derived from smoking-machine testing do not provide valid estimates of human exposure.”

Accordingly, the WHO guidelines say that figures related to emissions, including nicotine and tar, should not be placed on packaging. EU law also prohibits the promotion of “any information” about the nicotine content on the labelling of tobacco products.

PMI may not contravene any laws around packaging but it does continue to promote the misleading 0.5mg nicotine figure for its Iqos products across the world – including on the company’s Swiss website and, until recently, on its UK site.

The Bureau also engaged in live web chats on the company’s websites in South Africa, Malaysia and countries across Europe to ask about the nicotine content of its disposable tobacco sticks.

The 0.5mg figure was cited in response by staff in 11 countries, only two of whom said it referred to the level of nicotine in the emissions rather than the stick. The remaining nine incorrectly claimed or implied that it referred to the amount of nicotine in the stick itself. In one instance, an employee on PMI’s Swedish website claimed that the amount of nicotine in a heated tobacco stick – which the company brands as Heets – was 24 times less than a conventional cigarette.

Stefania Muccifora, an Iqos user from Italy – one of the largest markets in the world for heated tobacco – said that when she Googled the nicotine content of a Heets stick, the PMI website told her they only had 0.5mg each. “I said to myself: wow, that’s 20 times less than the cigarettes I was smoking,” she said. “So I started smoking Iqos.”

At an Iqos affiliate store in Rome, staff told the Bureau similar information. “There is 0.5mg of nicotine per Heets stick,” an employee said. When asked if there was less nicotine in Heets sticks than traditional cigarettes, they said “Yes, much less. In Marlboro Reds there is 14mg, for example.”

Enrico Davoli, a tobacco expert at the Mario Negri Pharmacological Research Institute in Milan, said that the Bureau’s findings are consistent with the international research reviewed by the WHO’s independent tobacco product regulation study group, which he is a part of. He said PMI’s claim that its tobacco sticks contain 0.5mg of nicotine “is not a correct statement”.

PMI told the Bureau that reporting nicotine emissions using the ISO regime is required by regulation in certain countries and “therefore we report 0.5 mg in those circumstances”.

The company had initially told the Bureau it would not respond to an organisation that was “writing funded content” and was funded by “a special interest group”.

The Bureau receives funding from a number of sources, including on global health the Bill & Melinda Gates Foundation and Vital Strategies. The Bureau is an award-winning independent newsroom, and supporters have no editorial say or advanced sight of stories.

Heated tobacco has been a growing market since PMI’s Iqos range was launched eight years ago, yet the International Organization for Standardization has still not published an international standard test for analysing the chemicals in heated tobacco products.

The committee in charge of providing a standard methodology for tobacco products is made up of experts, academics and industry figures from 31 countries. It is chaired by a former tobacco-industry lobbyist, Wolf-Dieter Heller.

One committee member told the Bureau that the rest of the members’ names are kept secret, but the majority are from the tobacco industry – “I know them all,” they said. (When the Bureau asked the ISO for a list of committee members, it was told that names could not be provided due to data protection and to “avoid third-party influence on members”.)

The member explained that every year ISO organises a meeting in a different city around the world. “The industry can pay to always send its representatives to meetings, while public research organisations cannot.”

They added that the workload is extensive, with a lot of reading required for each vote the committee members must make. This, they said, can be hard to fit in alongside their day-to-day academic work, meaning that the overly bureaucratic process strongly favours the tobacco industry.

Juliane Jung, the committee manager, said: “The development process of many – and especially new – standards takes time. The working group and the appropriate steering committee will look at each topic and evaluate the need for standardisation.”

How addictive is heated tobacco?

Because heated tobacco is a relatively new product, its long-term health impacts are largely unknown. PMI asked the Italian Ministry of Health to review its studies on Iqos so the company could legitimately claim that the products are less harmful than traditional cigarettes.

This had already happened with the FDA in the US, when the review found evidence that using Iqos produces fewer harmful chemicals than smoking a cigarette. However, the Istituto Superiore di Sanità (ISS), the Italian public health institute that conducted the review on behalf of the Ministry of Health, concluded that there are 80 substances present either only in Iqos emissions or in much higher concentrations than in cigarettes. Four of those substances are classified as carcinogenic; eight others could cause DNA damage, which can lead to cancer or birth abnormalities.

The ISS report also highlighted the fact that PMI had failed to provide specific studies on the level of addiction Iqos induces, which is required by the Italian law for a new tobacco product to be put on the market.

Various evidence, including that from PMI’s own testing, suggests that Iqos may be similarly addictive to cigarettes. Our results showed that while a stick contains less nicotine than a cigarette, it is twice as efficient at delivering the chemical in its emissions. The amount of nicotine a person inhales is largely the same.

In its statement to the Bureau, PMI acknowledged that “adult smokers switching to Iqos obtain comparable amounts of nicotine to that from cigarettes”.

The anti-smoke centre at the National Cancer Institute in Milan said that the high concentration of nicotine in Iqos suggests it can cause high levels of addiction. Roberto Boffi, head of the centre, said that some of their patients “seem to smoke even more with Iqos than they did with traditional cigarettes”.

But with PMI’s own information having proved misleading and inconsistent, Iqos users are left in the dark about just how addictive the products are.

“I started smoking Iqos because I thought I would smoke less and then manage to quit smoking altogether,” the Italian woman who used to smoke Marlboro Reds told the Bureau. “But now with Iqos I find myself smoking more.”

Source: The Bureau of Investigative Journalism